Home > Fiscaalzegels > Buitenland > The revenue stamped paper and revenue stamps from Nepal have really nothing to do with the post!

This smale mountainous country, squeezed between India and China in the Himalayas today remains poor but with a strongly independent monarchy. Expanding British interests and Nepali claims led to a war over the territory of Terai, which was settled by a treaty of 1816. British respect for the staunch Gurkha soldiers and Nepali respect for British diplomatic led to a mutual understanding, which continued throughout the day of the Raj. The economy is primarily dependent on subsistence farming and small craft industries. This is reflected both in the small number of revenue stamped paper and revenue stamps issued, and in the native paper and printing used for their production. Like the Indian native states stamps, small workshop methods of production were used – typeset for the Court Fee stamps and woodblocks for the Land Court stamps. This give a certain character and charm to the stamps, and provide many varieties for the enthusiast. Currency = 100 paisa = 1Rupee.

1. Revenue stamped paper with state service stamps:
This kind BANK NOTE STAMP size 62 x 150mm) without value panels or other inscriptions shows the official seal at the center. This stamp was first printed on top of a sheet of domestic paper, apparently, and it was necessary to write all petitions and requests to the prime minister on  a sheet. Throughout the period of the Rana Regime (ca. 1850 – 1950) the Prime Minister was the absolute ruler of the country. The petitioner had to pay a rupee for a piece of paper with this imprinted tax stamp without indication of value. See Figure 1.

2. Revenue stamped paper stamps (stamped paper, tax stamped papers)
These large rectangular stamps (ca. 68 x 146 mm) are similar to the SERVICE stamps described at the beginning of this discussion. First issued in 1922, they are distinguished by the value panels at left and right of the centrally located official seal. They are normally found detached, often roughly cut from the sheet, if found on an entire sheet, the stamp is just under a printed heading and carries both a Series number and a Serial number. All are printed in black and at least nine values are known to this writer. These „stamp“ were involved with all sorts of cases coming before the courts of law and , as mentioned earlier, documents (or portions of them) can be found with one of these stamps plus a variety of SERVICE stamps and/or postage stamps, from the later Sri Pasupati issues up to the early 1960s. An example of this basic stamped paper (revenue stamped paper) you can see in Figure 2.

3. Landlord Revenue Stamps
This square (ca. 66×67 mm) stamp, printed on native paper, has a design reminiscent of the first postal issue. Three values are know: 1 Rupee (blue) 2 Rupees (green) and 3 Rupees (red). All are known as new as well as used and can occasionally be found on the top of a sheet of local stamp paper glued by the Landlord. All tenant agreements are described therein. All tenant agreements are described therein. The 1 rupee value is quite common in used condition, but is very rare. On the other hand, the value of 2 rupees seems more common in color mint and the red value is very rare. See figure 3.

4. Court Fees revenue stamps
First issues in 1922, there are some 22 denominations, ranging from 1 pice to 25 Rupees. There may be higher values but we have not seen any, if they exist. The design is (ca. 37 x 58 mm), printed in black on white handmade paper- – usually white thick—for the seven pice values; orange on white or blue paper for the Rupee values up to and including 10 Rupees. The 15, 20 & 25 Rupee values are normally found printed in blue, green & red, respectively, on white paper. All are found with a variety of cancels—often several on a stamps – including punch, pen, red star and seal cancels. The example shown in Figure 4 orange in white paper. The denomination panel (bottom center) is changeable and interesting variations and errors can be found. Unpunched examples normally are bought at a premium as they are relatively scarce. They can be found on revenue stamped paper, along with postage stamps up to ca. 1960.

Nine Rupees revenue stamp for court fees. At top „Shri Pashupatenath“. At both sides the same „Nalees Dastur“ (both words means law). At the bottom „Nepal Sarkar“ (Nepal Service) and the lowest panel contains „Moharu“ (Price) and denomination.Tied by punch, also handwritten, with a black stamp and a red star stamp.

Source: Docs from Wolfgang Morscheck Bad Säckingen Germany, Information and one pictures (Landlord Stamps) from the internet, Building a Nepal Collection von Leser A. Michel from Index of /collections/journals/postalhimal/pdf. 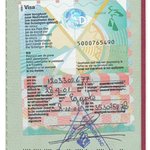 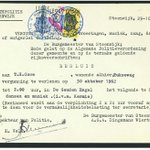